Silverstone 8th May (Rounds 3 and 4 of Honda VTEC Challenge)

With the dust barely settled after our season opener at Oulton Park, the Honda VTEC Challenge series headed to the “home” of British Motorsport, Silverstone on the 8th May.
Setting the pace early on in qualifying was Adam Jones in his turbocharged EP3, with Paul Waddington in close contention. With the session coming to an close, Mark Bennett in the S2000 pulled out his fastest lap and pipped Waddington to take 2nd place. Paul Donkin set the fastest “Production” class time of the session, followed by Pete Dunmore and Paula Webb.

With the lights out, Jones suffered from an excess of wheel spin, which saw Bennet and those behind capitalise. Bennett took an early lead, from King and Waddington, whilst further back saw Smee cut a path through the field.

With Jones recovering from his earlier problems, he began to mount his comeback and skilfully picked his way through the field until he was back out in front. However, even when leading, Jones was unable to rest on his laurels and he was put under constant pressure from Waddington and Bennett for the remainder of the race. At the chequered flag, there was little over a second separating the top 3 and an almost photo finish for 2nd! A fine example of the diversity of machinery in the VTEC Challenge and how evenly matched cars and drivers can be.

Donkin in the red EP3 began to make a break for the “Production” class lead and was looking at a top 5 finish until the Civic lost VTEC. Having to drive around the problems saw positions fall to Kemp and Biel. With Donkin stricken, Smee began to sense a class win, but with a near spin at “Becketts”, the gap opened up and the time left on the clock wouldn’t allow.

Off the line in race two and it was Waddington who got away first, as Jones again suffered from excessive wheel spin. Coming through from 4th, King was up into 2nd place at Copse, however, Bennett and Jones managed to make their move on the opening lap to take back their positions, with Jones going on to retake the race lead soon after, leaving Waddington and Bennett giving chase.

Webb, Nolan and Corton found themselves in a good 3 way battle for position in “Production” class, with carefully planned overtakes and subsequent re-overtakes throughout the race. Only an unfortunate spin on some dropped oil stopped Webb climbing further up the order. The oil was the result of a holed engine in that of Martyn Kemps Civic, which also saw his retirement from the race after having a great drive up to that point, dicing with Donkin, Biel and King.

With The top 3 cars so close, any mishap would have huge repercussions and running wide on the last lap saw Jones lose the lead. Not waiting to be asked twice, Waddington seized the opportunity and took first place. Jones immediately began to correct his mistake, but was unable to overhaul Waddington who went on to cross the line and take his first VTEC race win and Bennett took 3rd.Class wins where awarded to Adam Jones (Super Tuner) Paul Waddington (Tuner) and Paul Donkin (Production) in both races.

Thanks go out to BRSCC, and series sponsors Toyo Tires, Dream Automotive, Competition Clutch, TDI North, Performance Autoworks, Eurospec, Simulator Racing, Honda Nation and MOTORV8 MEDIA for their support.
The Honda VTEC Challenge next heads to Rockingham on the 11th and 12th June. 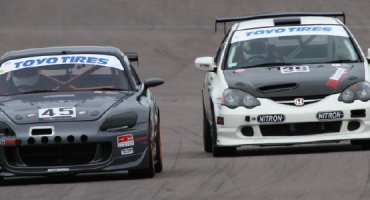